The Eastern Chapter of the Archives Association of Ontario held its’ Annual General Meeting at the home of the new City of Ottawa Archives on May 26, 2011.  Members and guests were fortunate to have a sneak pre-view of the new facility before it was officially opened to the public.

It was the perfect setting for our meeting as the 2010-2011 Executive presented an update to members on the past year’s activities.  Presented were the president’s report, and the treasurer’s report—financial statements and budget.  And importantly, the members had the opportunity to discuss the past year’s events and to make suggestions for the upcoming year.

Carrying on with the business of the , the Chair of the Nominations and Elections Committee, Brian Beaven, presented the slate of officers for the new executive and called for nominations from the floor.  The entire 2010-2011 executive agreed to stand for re-election and together with Jenna Smith who put her name forth for election, the new executive was formed.


And then for the moment, all had been anticipating, City of Ottawa Archivist Paul Henry spoke briefly about the new archives building and took all those in attendance on a tour. The night concluded with the Executive, Chapter members, and guests mingling over light refreshments and snacks! 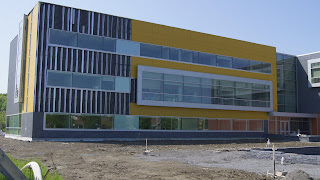